In some ways I wish I still had this piece.  Signed by Ali & Tyson

In 2010 I was flown out to Phoenix Arizona to paint live at Ali’s charity event ~ Celebrity Fight Night ~ A star studded event with A list celebrities raising large amounts for Parkinsons.  It was a dream come true event for me as an Artist and boxing fanatic.

I had already produced a number of pieces for various Tyson events in the UK, and whilst looking for reference images I came across the Celebrity Fight Night event on the Internet…I got excited and emailed the executive director of the charity,  within 30 mins I got a call  “Hi Pat,  we’d love to fly you out and paint live at our charity event”  exactly what I wanted to hear.

To any aspiring Artist…if you don’t ask, you don’t get.  Many times I’ve had a No but you keep pushing.

But first I had to get it signed by Tyson at the next event.  I managed to do this although I asked Tyson whilst eating his dinner if he could sign it, I told him it would be auctioned at Ali’s charity event…He signed it no problem….but I then asked if I could have a photo.  He glared and said “I’m eating my dinner” Sorry Mike I said and quickly walked off.  But very happy I got his signature on the piece.

It was signed by Ali at the charity event but at that time he wasn’t good.  His eyes lit up seeing the piece.

The auction items at this event in 2010 Included a Bugatti bike and even a car. 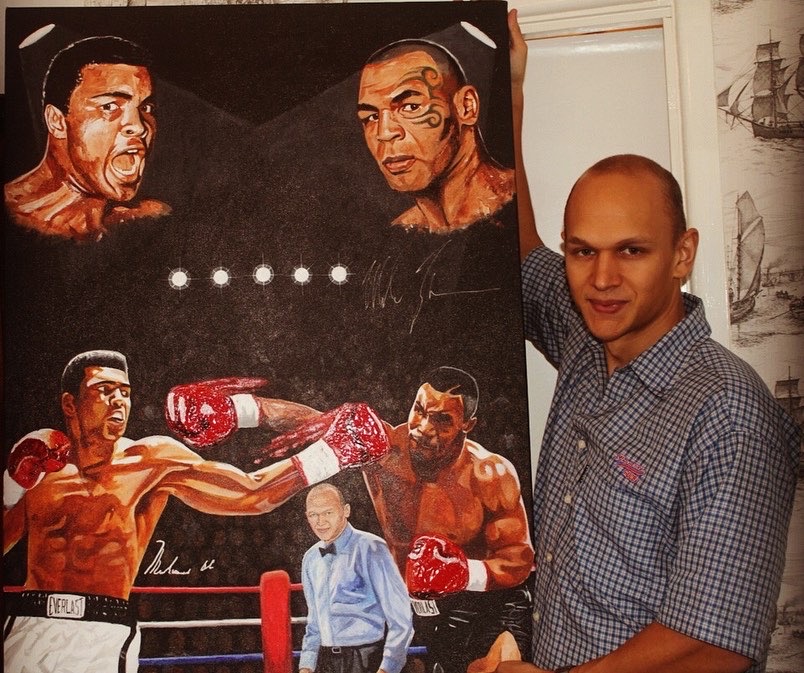