This Limited Edition of 850 prints has been produced from an original oil painting by Patrick J Killian to celebrate Wales achievement. On the 19th of March 2005 Wales Sparked off national celebrations by clinching there first grand slam in 27 years with a spirited win over Ireland at the Millennium Stadium – Wales 32 – Ireland 20. This Fine Art Print shows key moments from each of the games, top left against England, top right against Italy, bottom left against France, bottom right against Scotland and the championship Win against Ireland around the RBS Six Nations Trophy.

Each print has been individually numbered and hand signed Sports Artist Patrick J Killian. A certificate of authenticity accompanies each print. 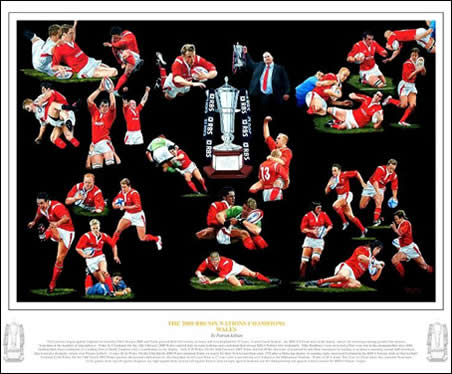