Title: Joe Calzaghe v Chris Eubank
Medium: Art Print
Edition: 97 (Year he won WBO title)
Size: 18" x 15"
Signed by Artist: Yes
Finish: Framed
Price: £145
20 yr anniversary since Calzaghe becomes world champion ?
After Collins retired, a fight against British boxing legend Chris Eubank was quickly set up for the vacant WBO title on 11th October 1997, in Sheffield. Calzaghe emerged victorious over the two-time WBO champion, shockingly knocking the granite chinned Eubank down in the opening seconds and claiming a unanimous points win. The judges scored the contest 118–110, 118–109, and 116–111 in favour of Calzaghe.
Eubank said of Calzaghe in a 2006 interview that: ''Joe is the proper article, a true warrior. Calzaghe conceded that Eubank, even in his comeback, gave him the toughest fight of his life. Signed by the artist The Original was Commissioned by Newbridge Rugby Club in 1997 after Joe becomes World Champ for a presentation evening at Newbridge Rugby Club. Photo of Enzo Calzaghe, Peter Merton, Joe Calzaghe and Artist Patrick J Killian Joe Calzaghe owns the original Painting 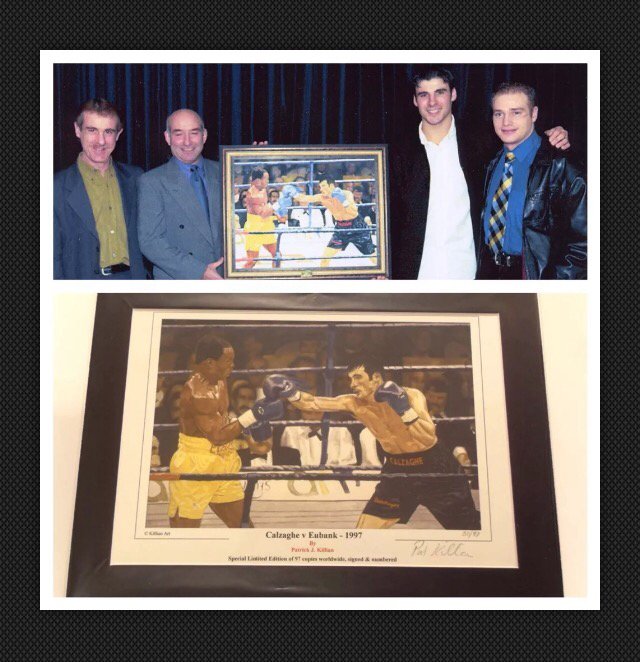